“Roots” or Origins of the Jordan Rozwadowski Family

According to historical sources not fully substantiated, the Jordan-Rozwadowski family originates from the Jordan family – one of the wealthiest families in Poland during the 14th, 15th and 16th centuries. The Jordans owned huge estates in Małopolska (Little Poland). Surnames ending in –ski first began to appear at the turn of the 14th and 15th centuries. Previously it would be simply stated from which place someone originated – this applied only to the landed gentry (posesionatus).

Jan Jordan from Zakliczyn (during the reign of King Zygmunt I) probably obtained Rozwadów Wielki (Great Rozwadów) near Mikołajów on the Dniester River (before WWII in the Stanisławów province, district (powiat) Żydaczów), currently the Mikołajewski district of Lviv region). Probably from this time he wrote his name as Jan Jordan Rozwadowski from Wielki Rozwadów…It is however, incorrect to state that the roots of our family stem from Rozwadów on the San River – which town was founded in the 17th century by Gabriel Rozwadowski! There are also theories suggesting that all Rozwadowskis come from Wielki Rozwadów in the Łukowski district, but those Rozwadowski use the Rogala Coat of Arms, whereas all the Rozwadowskis from the Sandomierz and Halicz trunks and Łukowski branch, and Lubelski and Tuchowski lines – always used the Three Bugles crest and indicated that they originated from the Jordan Family.

The Family Jordans from Zakliczyn from Wielki Rozwadów Rozwadowskis takes its origin as Rozwadowskis from the mid 16th century. The indicators are: signature of Jan Jordan, lord of the manor in Rozwadów; statements of heraldists and investigators: Niesiecki and Bobrowicz (…one district or family with the Jordans”) & Żernicki – “Polish Gentry” German edition. 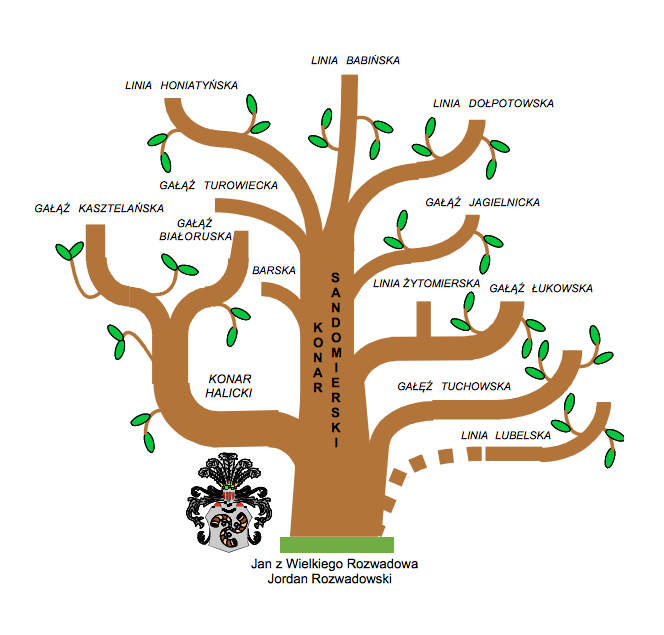 1. Victor Jordan Rozwadowski’s life, and history of his descendants (Download)